Oregon's land use planning system and other federal, state, and local laws and regulations protect Oregon's coastline, forests and farms from some of the harmful effects of unchecked development. Constant vigilance and occasional legal action are required to ensure that these laws and regulations are enforced.

Oregon Shores is engaged in a multi-year battle to block a golf development near Crook Point, key habitat for nesting seabirds.
The Land program is the oldest component of the Oregon Shores portfolio. The board and membership of the organization have traditionally included attorneys and citizens with significant expertise in Oregon land use law and applicable federal law. The organization has used this expertise to intervene in land use decisions on behalf of important habitat areas, public access to the shoreline, and conservation of resources on and near the coast. During the past decade, this work has been strongly augmented through the Coastal Law Project (CLP), a partnership with the Crag Law Center.

The Land program has pursued many dozens of cases protecting river and estuarine habitat; tackled sources of pollution reaching the ocean such as sewage treatment facilities and instream gravel mining; opposed inappropriate development proposals adjacent to the shoreline that threaten shoreline habitats (e.g., the current battle to block a golf course at Crook Point, adjacent to one of Oregon’s most important seabird nesting areas); and advocated for public purchase of ecologically important areas (for example, the recent purchase by Oregon State Parks of the “Beltz Farm” property on the Sand Lake spit, which shelters one of Oregon’s most ecologically significant estuaries). The program is currently engaged with coalition partners in efforts to block development of LNG export facilities, which would damage coastal habitats while contributing to global warming and increased energy costs in North America.

Much of this work is necessarily reactive (responding to development threats as they arise) but Oregon Shores increasingly seeks to mount a proactive legal strategy for coastal conservation issues. Landscape-level threats ranging from sea level rise to mining impacts to changing rain and water supply patterns will require systemic, adaptive planning and perhaps new legal mechanisms. A long-term strategy is needed to anticipate and address future land use challenges, including threats to estuaries, beaches and other shoreline areas, shifts in the location of wetlands and public-access natural areas, changing transportation systems and other public infrastructure, changing patterns in residential and commercial development, managed retreat from inundated or eroding shoreline developments, and onshore sources of impacts to water quality in the marine reserves and the nearshore ocean environment generally. 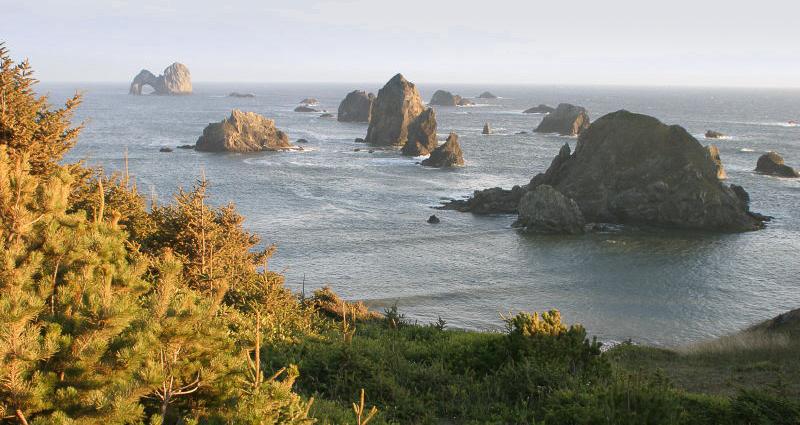 Oregon Shores is engaged in a multi-year battle to block a golf development near Crook Point, key habitat for nesting seabirds. Photo by Dave Ledig.