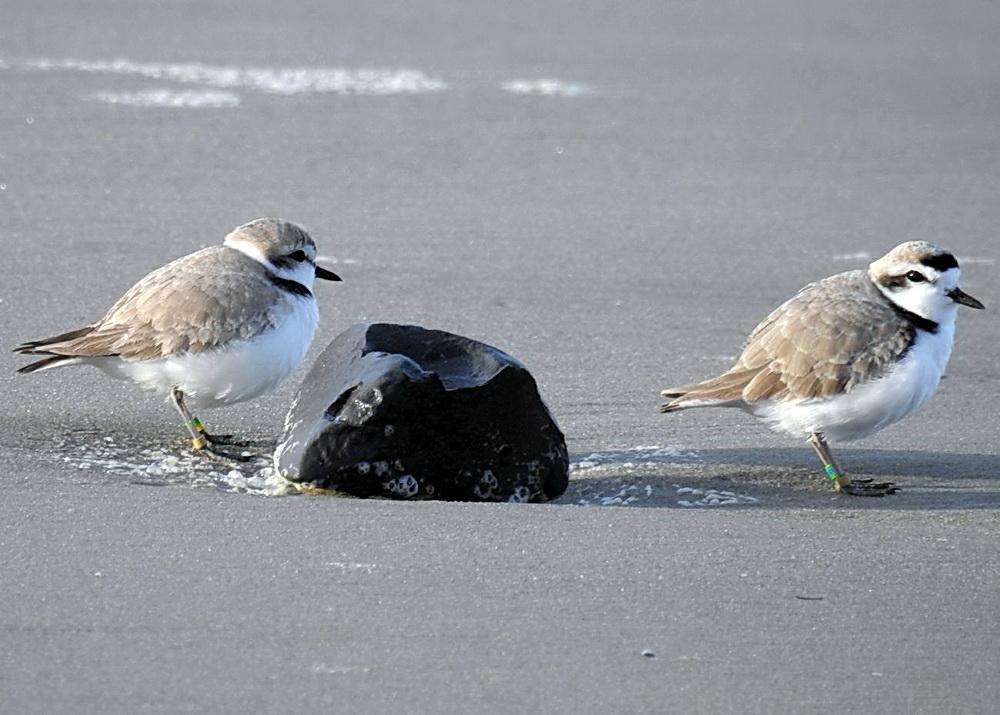 Oregon’s conservationists and resource agencies have been engaged in a decades-long effort to restore the state’s population of the Western Snowy Plover, an endangered shorebird that nests on Oregon beaches (the only shorebird that breeds here).  We are now in the nesting season, the crucial period for conservation and recovery, and the help of everyone who visits the beach is needed.

The bird’s Pacific coast population has declined severely due to loss of habitat and disturbances caused by human beings through development and recreation. In Oregon, the coastal population hit a low of about 50 individuals in the early 1990s (there is a separate, inland population). In 1993, the U.S. Fish & Wildlife Service listed the species as threatened under the Federal Endangered Species Act.

To avoid closing our public beaches entirely to protect nesting birds, the state of Oregon entered into a pact with the federal government known as a Habitat Conservation Plan, launched in 2010. Thanks to these targeted recovery efforts in Oregon, mostly focused on the south and central coast, the plover population has increased—2018 surveys indicated a minimum of 524 birds of breeding age, of which 79% were actually observed nesting.  (It appears that there was about a 49% nesting success rate, meaning that young birds were observed hatched at the site.)  This remains a perilously small and vulnerable population. Snowy Plovers are still largely absent at most historical north coast nesting sites.

The Oregon Parks and Recreation Department (OPRD), which leads the recovery efforts for Oregon, maintains a website with background information on the Western Snowy Plover management efforts.  Here you will also find links to the Habitat Conservation Plan, and to the report on how the program fared in 2018.

All beachgoers are can assist the ongoing effort to restore healthy populations of the threatened Western Snowy Plover to Oregon’s beaches by respecting nesting areas and beach restrictions during nesting season, March 15 through Sept. 15. Signs and ropes that identify sensitive western snowy plover nesting areas have gone up now that nesting season has begun, and all those who visit our shore will need to adhere to any posted restrictions. There is one set of restrictions for known nesting areas, and another for areas that are considered potential breeding habitat.

CoastWatchers have a special role to play in keeping an eye out for nesting plovers in unexpected areas not already protected, and watching for and reporting violations of protected nesting area restrictions.  (Whether or not to reprove violators on the spot is a judgment call; under no circumstances get into an altercation—leave that to the State Police and Oregon Parks and Recreation Department beach rangers.)

These federally protected shorebirds nest on open sand along Oregon’s beaches. Nests, and especially chicks, are well-camouflaged. During nesting season, human disturbances can flush adult plovers away from their nests as they attempt to defend their young from the perceived predator. Left alone too long, eggs or chicks can die from exposure, predators, or human intrusion. This is still an active recovery effort and nest protection is essential to the bird’s survival and perhaps eventual delisting.

Certain beaches, listed here (Oregon dunes only, an area managed by the Siuslaw National Forest) and here (coastwide), are known plover nesting areas. On these plover beaches, the dry sand and dunes are closed to all access, except along official trails, to protect eggs and chicks. Visitors may see roped off areas within these plover management areas, which serve to protect the most sensitive habitat; however, all dry sand on both sides of the rope is closed, except on designated trails. Wet sand areas on plover beaches remain open to foot and equestrian traffic (no dogs, kites, drones, camping, bicycles, or motor vehicles are allowed).

These plover nesting areas are spread along the entire coast and collectively comprise only about 40 miles of Oregon's 362 miles of shoreline.  Visitors to the Oregon Dunes National Recreation Area are encouraged to review this map to identify unrestricted recreation areas, and information on riding motor vehicles on the sand can be found here.

Detailed information about nesting restrictions and site locations, as well as links to resources from Oregon State Parks, can be found on the Siuslaw National Forest website at www.fs.usda.gov/siuslaw.  For more information about the federal efforts, contact Lisa Romano, the Siuslaw National Forest’s public affairs staff officer, at (541) 750-7075, [email protected].

In 2019, OPRD formed a partnership with Portland Audubon to engage volunteers in surveying nesting sites on the north coast.  Getting the community involved in monitoring Snowy Plovers on the north coast will help OPRD track where they are and how they are doing as other management occurs (e.g. habitat restoration), and offers an opportunity to engage the public to help protect this threatened species of the Oregon coast.  For more information, contact Joe Liebezeit, [email protected], or Amelia O’Connor, [email protected].