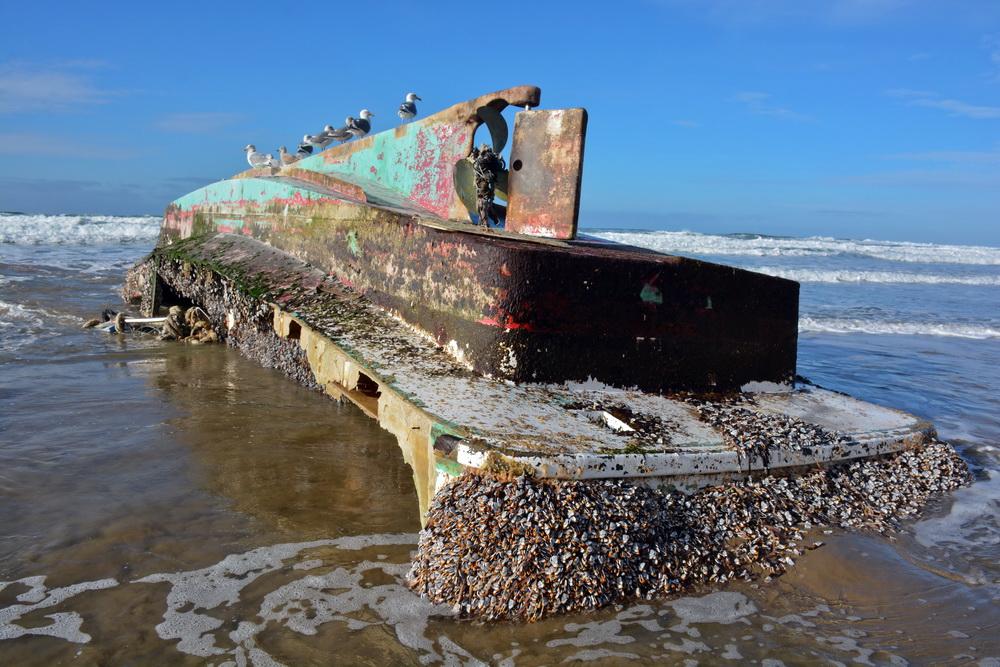 On Dec. 2, a derelict 38-foot Japanese fishing boat, debris from the 2011 tsunami that devastated Japan, washed up on Arcadia Beach south of Cannon Beach.  Six years after the earthquake and tsunami on the other side of the Pacific, we’re still receiving debris.  The vessel that washed up was festooned with pelagic barnacles.  It remains to be seen whether it had carried non-native species across the ocean.

Keeping watch for tsunami debris which may be carrying non-native and potentially invasive species from Japan is something we've asked CoastWatchers to do ever since the Tohoku earthquake.  A number of CoastWatchers have brought materials they found to researchers at the Hatfield Marine Science Center in Newport.  Those researchers have been studying the surprising degree to which Japanese organisms have survived multiple-year journeys across the Pacific, freighted by debris washed out to sea by the tsunami triggered by the earthquake and eventually washing up on our shores.

One of those researchers is Gayle Hansen, a leading expert on marine algae (aka seaweed) who just happens to be a CoastWatcher as well.  She has published scientific papers on this subject that drew on the findings of CoastWatchers, among others.

Hansen recently completed a three-part account of the morphology of the marine algae and cyanobacteria found on Japanese tsunami marine debris.  She created these accounts so that researchers and naturalists working along the Oregon and Washington coast would recognize these species and possibly detect any new introductions of the species that might occur in our area.  Some of the species are known only from Asia, but a substantial number of the species (~60%) had been reported to occur in the N.E. Pacific before the tsunami.  Comparative sequencing studies of these “shared” species revealed that some were actually different species and that many were different races.  The small genetic differences in the new species and the races occasionally showed up in the morphology – as is illustrated for several species in these accounts.

Full-color accounts of the 84 debris species are now published in OSU Scholars Archive and are open access to all.  The Scholars Archive citations with their doi links are listed below – along with a summary of the overall study.  (Be sure to click the download button on the SA website to view the documents.)

Also, here is the link to the teaching poster on debris algae that Hansen completed earlier:

Here is a summary of her reports:

“Carried by currents across the North Pacific from Japan, hundreds of debris items from the 2011 Great Tohoku Earthquake and Tsunami landed on the shores of Oregon and Washington between June 2012 and August 2016.  Many items carried Japanese biota, and there was concern that these species might invade our coast.  Investigations were started to identify both the invertebrates and the algae.  Our project took on the task of identifying the algae and cyanobacteria on 42 of the most heavily fouled debris items.

“Using both morphological and molecular methods, we identified more than 84 species on debris, and all appeared to be from Japan.  The molecular identifications were carried out by my colleagues in Japan who sequenced 51 of the larger species and published their results in our companion paper on the project (Hanyuda, Hansen, & Kawai, 2017).  To document the morphological identifications, I prepared the following 3-part account on 84 of the debris species and their variant forms.  These morphological accounts, organized by major taxonomic group, include illustrations of the species, descriptions of their diagnostic features, and information on the biogeography.

“Both approaches to the study were essential. This became particularly obvious when we tallied our initial collection results:  40% of the species were unknown in the Northeast Pacific, but 60% had been reported to already occur here before the tsunami. Except for the obvious human introductions, most of the shared species were thought to have been dispersed to North America by currents in earlier times. Our comparative sequencing of the species was revealing a different story.  Many of the species shared between Japan and the NE Pacific were genetically distinct, distant enough from one another to be different races or species. Comparison with global sequence data also indicated that many of these species were genetically most similar to species outside of Asia.  This study (Hanyuda, Hansen, & Kawai (2017) underscored the need to evaluate more closely the morphology of the debris species and generated the production of this series.

“These accounts provide photographs of the actual species on debris.  We hope that the pictures (and their sequences in GenBank) will be used for comparison with new collections from the Northeast Pacific to document introductions that might be found during the coming years.”