Oregon has a prospective world-class renewable energy resource in the ocean waves that pound the coastline day and night, year ‘round.  Possible development of this energy resource came to public attention more than a decade ago when several companies filed claims on nearshore areas where they intended to locate energy-capturing devices.  A site near Reedsport, in particular, garnered a lot of attention.  Other sites on the coast were quickly identified by companies and even coastal counties hoping to cash in on a wave energy “gold rush.”

Pressure to develop was met by concern from commercial fishermen, environmental groups, and others about the potential impact of wave energy farms, especially if the gold rush panned out.  Eventually, Governor Ted Kulongoski directed the Ocean Policy Advisory Council (OPAC) to undertake what became a long, complex process to amend the Oregon Territorial Sea Plan to account for future wave energy development while protecting these other resources.  Robin Hartmann, then Oregon Shores’ Ocean Program director, led OPAC’s first working group on ocean renewable energy, and then served on the working group that developed the amendments to the Territorial Sea Plan.

Early optimism by the energy industry and supporters of ocean renewable energy has given way to the reality that the ocean is a tough place to do business and that cost-effective technologies for capturing the seemingly limitless energy of ocean waves at “commercial scale” have yet to be developed.  All the companies that were initially interested in the Oregon coast have given up their claims.

But the need for renewable energy sources remains in Oregon and nationwide and the drive to develop what is now termed “marine hydrokinetic” (MHK) energy devices has taken a different route.  The U.S. Department of Energy National Renewable Energy Lab (NREL) continues to support research and development of viable technologies that can take advantage of the ocean’s vast energy. 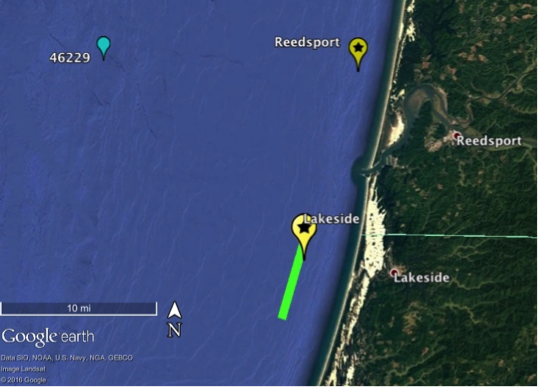 The NREL recently solicited research proposals to collect detailed measurements of ocean wave and tidal characteristics at numerous locations nationwide.  Two sites were selected along the Oregon coast, one offshore from Lakeside, in an area identified in the Territorial Sea Plan as potentially suitable for ocean energy development, and another offshore from Reedsport, just north of the Umpqua River at a location previously claimed by an ocean energy developer but which is not included in the Territorial Sea Plan as an optimum site for development.

Research proposals have been received by NREL and have come to the Oregon Department of State Lands for permitting.  Each of these research projects will involve a single data collection buoy and associated equipment that will collect data for one year, after which the buoy and all anchoring equipment will be removed from the ocean.