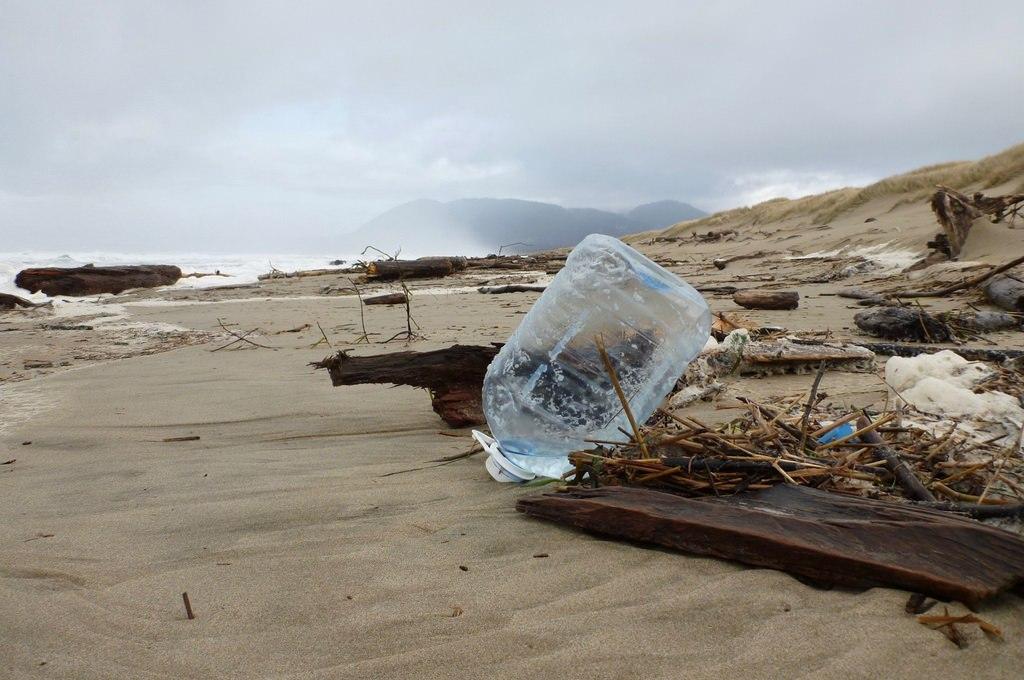 Plastic jug on the shore.\Photo by Steve Morey.

Marine debris is defined by NOAA (National Oceanic & Atmospheric Administration) as any persistent solid material that is manufactured or processed and directly or indirectly, intentionally or unintentionally, disposed of or abandoned into the marine environment. Marine debris is (mostly plastic) waste blown in from the ocean or pushed in by the tides – and it’s nearly ubiquitous now when we walk on any shoreline. Marine debris is more visible in the winter; winter storms batter the sandy beaches, carving out previously washed-up debris that has been buried, while powerful currents carry in new debris from far away.

Most of us pick up what we can because we want to leave the beach better than we found it. A lot of it is derelict fishing gear, because the fishing industry loses a great deal of netting, crab pots, and other gear. Marine debris can be in the ocean for years, even decades, and is broken up, flattened and/or made smaller with the heat from the sun and the pummeling of the waves and shores. It can be deposited on the beach, found in the wrack line and if not picked up, buried or grabbed by the tide to be deposited on another beach. Surprisingly, the most common type of marine debris is cigarette butts.

In Oregon we share an ocean with other distant lands, and we see the evidence of this shared ocean. We still see debris from the March, 2011 tsunami that struck Japan and washed an estimated five million tons of debris into the Pacific Ocean. A significant portion of this debris reached U.S. shores over the next several years, and it still arrives from time to time. Because marine debris washes ashore continually, it is sometimes difficult to distinguish what is tsunami debris and what isn’t. We also see content spilled from cargo ships, after damage in massive storms on the seas. There are significant changes in the types and quantities of debris on a shoreline over time.

The U.N Environment Program estimates that 6.4 million tons of garbage reaches the ocean every year.

Land-based debris are obvious, left-behind garbage. Food waste from take-out containers or picnics are among the most common; cigarette butts are also a common land-based debris in addition to arriving as marine debris; pandemic masks are now common; we see occasional tires; and then there is the ever-present dog waste bags.

What can be done about it?

To observe a potential shift in debris types and abundance, CoastWatch volunteers can conduct monthly shoreline surveys using a protocol developed by our partners at NOAA. Conducting marine debris monitoring at selected sites develops scientifically useful data about the amounts and types of debris reaching Oregon. Volunteers are a crucial and much needed aspect of these marine debris-monitoring efforts and gather data on the types and amounts of marine debris reaching the shore. CoastWatch conducts marine debris surveys year-round at numerous sites. CoastWatch volunteers may choose to monitor for debris on their adopted mile, or join others at another survey site. These sites are approximately 100 meters (325 feet) long. No prior experience is necessary and groups of at least two are needed.

Marine debris has detrimental impacts on wildlife and habitats, both in the water and on the beach. Debris can easily be ingested by marine species causing choking, starvation, and other impairments. Debris can be anything from plastic nets that can entangle large animals to tiny pellets (nurdles) that may be mistaken for food by shorebirds or invertebrates. Marine debris, especially plastics, can persist in the ocean indefinitely, circling around in vast oceanic systems known as gyres, until storms drive it onshore. These ever-shifting "garbage patches" concentrate debris over huge marine areas.

Picking up any amount of debris makes a difference. Whether you are filling your pockets or filling a bucket during a beachwalk, your efforts are keeping garbage out of the ocean and off the beach. CoastWatch encourages volunteers to include photos in their CoastWatch reports of how much trash they collect during a CoastWatch Mile walk. So many volunteers lead by example with their efforts.

Consider organizing a cleanup or joining another one. Cleanup events are feel-good activities, but they also have immediate and lasting impact.

NOTE: If you plan a cleanup, please try to determine if there is a marine debris monitoring survey happening in the area you want to clean. Monitoring events are also cleanup events – once the debris has been accounted for, it is disposed of – but a cleanup event taking place before a marine debris survey is conducted can skew results. CoastWatch and our partners are working on a central website to find all cleanup and monitoring information, so these events will be easy to find. In the meantime, please contact CoastWatch Volunteer Coordinator Jesse Jones (503-989-7244, [email protected]) to be added to this list, or to inquire about cleanup events and monitoring schedules.

Turning off the tap

Activists in Oregon and around the world are working to reduce plastic creation in the first place, by working with producers to reduce production and/or take responsibility for the plastics they make.

In Oregon, the Break Free From Plastic Pollution Act introduced by Senator Merkley and Representative Lowenthal creates a temporary moratorium on new or expanded permits for facilities that manufacture plastics until regulations are updated to address pollution.

In addition to CoastWatch organizing debris monitoring and public education, it is one of many partners working together as the Oregon Marine Debris Team (OMDT). OMDT was created after the 2011 tsunami and was initially structured to organize debris scouting for the entire length of the Oregon coast and organize cleanups where they are needed.