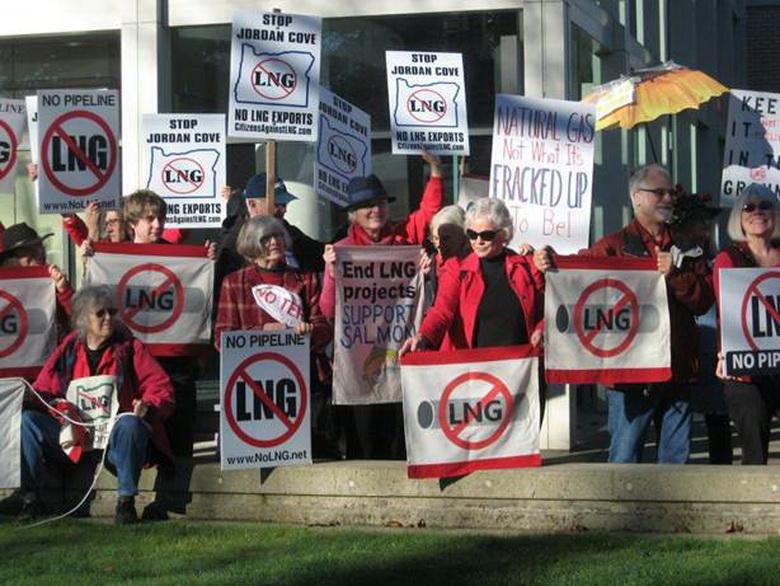 The conservation groups attempting to block fossil fuel development and export along the West Coast are sometimes called the “Thin Green Line.  Oregon Shores, with our battle against the Jordan Cove LNG export terminal proposal, is certainly part of this line.  Just lately, there have been several notable victories.  Jordan Cove has been turned down twice in the past few weeks (see our article on the latest victory).

As the organizers put it, “On Jan. 19, years of organizing work paid off on two of our biggest NW fights on the same day! The Federal Energy Regulatory Commission (FERC) upheld the Oregon Department of Environmental Quality’s denial of the key Clean Water Act permit for the proposed Jordan Cove LNG export terminal and Pacific Connector fracked gas pipeline in Southern Oregon. And then the Washington Department of Ecology denied the key Shorelines permit for the massive fracked gas-to-methanol refinery proposed in Kalama, WA.

“These wins do not happen every day. These victories clearly demonstrate the immense power of grassroots organizing and the local communities who've been leading these fights on the ground for years. Thank you for being in this fight and come raise a virtual glass with us as we take time to soak in these victorious moments!”

If you want to celebrate the victories and talk about what comes next, register here.