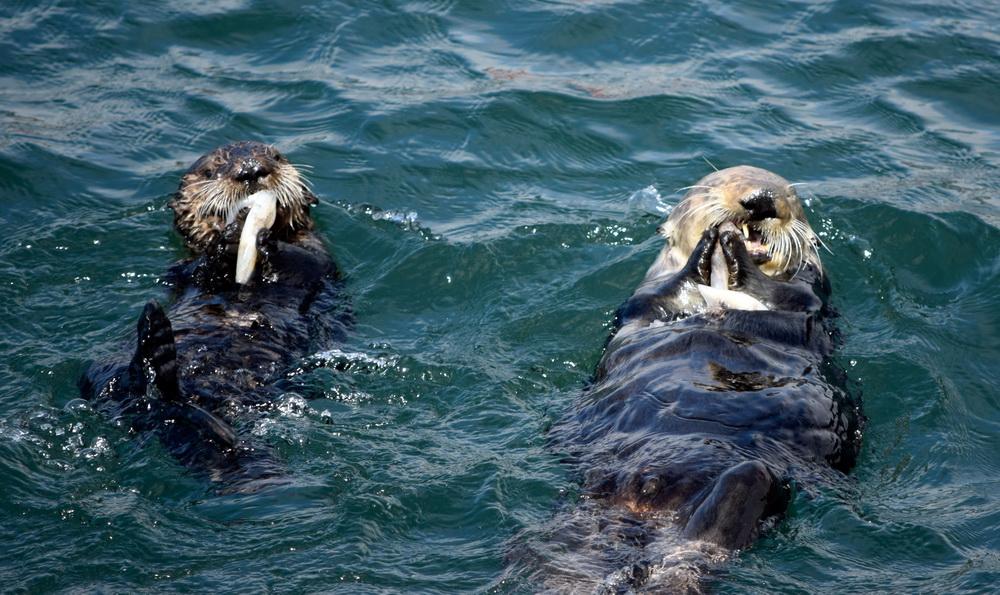 Sea otter and pup.\Photo by Eric Palmer.
The Elakha Alliance, of which Oregon Shores is a founding member, works toward making the case for restoration of sea otters to the Oregon nearshore ocean ecosystem, where they have been extinct for more than a century.  On Tuesday, Jan. 19, at 6:30 p.m., Bob Bailey, president of the alliance, will speak on exactly that subject: “The Case for Restoring Sea Otters to Oregon.”  The online event, sponsored by Shoreline Education for Awareness and Friends of the Southern Oregon Coast National Wildlife Refuges, is free and open to all.

Once common on the Oregon coast, sea otters were hunted nearly to extinction for their rich fur in the late 1700s and early 1800s, with the last of them disappearing by the turn of the 20th century. Although they have returned elsewhere, they remain missing on the Oregon coast. What are the consequences of their absence? What will it take to bring them back? This talk will explore the history of sea otters in Oregon, their ecological and cultural importance, and the prospects for their return and recovery. It will touch on the mission of the Elakha Alliance, an Oregon non-profit organization devoted to sea otter conservation.

Bob Bailey, a former Oregon Shores board member, retired as director of Oregon’s Coastal Management Program in 2011, after nearly 40 years of working on coastal and ocean planning and management for the State of Oregon.