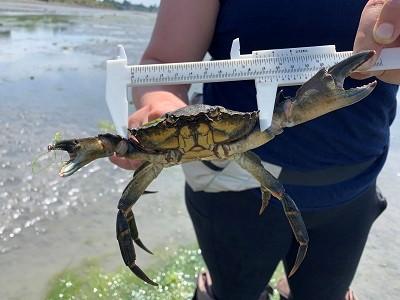 On Wednesday, Jan. 18, join speaker Dr. Elizabeth Brasseale for a "Lunch and Learn" at noon in the Hatfield Marine Science Center's Library Seminar Room (2030 SE Marine Science Dr. in Newport). Dr. Brasseale is a postdoctoral scholar in the Giddings lab at the University of California San Diego's Scripps Institute of Oceanography. She will discuss her research on estuarine-shelf interactions and larval transport of marine invasive species in the Pacific Northwest that she completed during her doctoral studies at the University of Washington.

"Estuaries in the northern California current system (CCS) experience seasonally reversing wind stress, which impacts the paths by which ocean water enters the estuary. Here, variations in inflow to the Salish Sea and the Columbia River estuary, two large estuarine systems in the northern CCS, were studied using a realistic numerical ocean model. For both the Salish Sea and the Columbia River estuary, upwelling-favorable wind stress was strongly correlated with an inflow source farther north of the estuary mouth and with greater relative depth. The correlation of wind direction seasonality with timing of marine species spawning helps to explain the resilience of the Salish Sea to European green crab invasion."

This event is free and open to all. To learn more, go here.