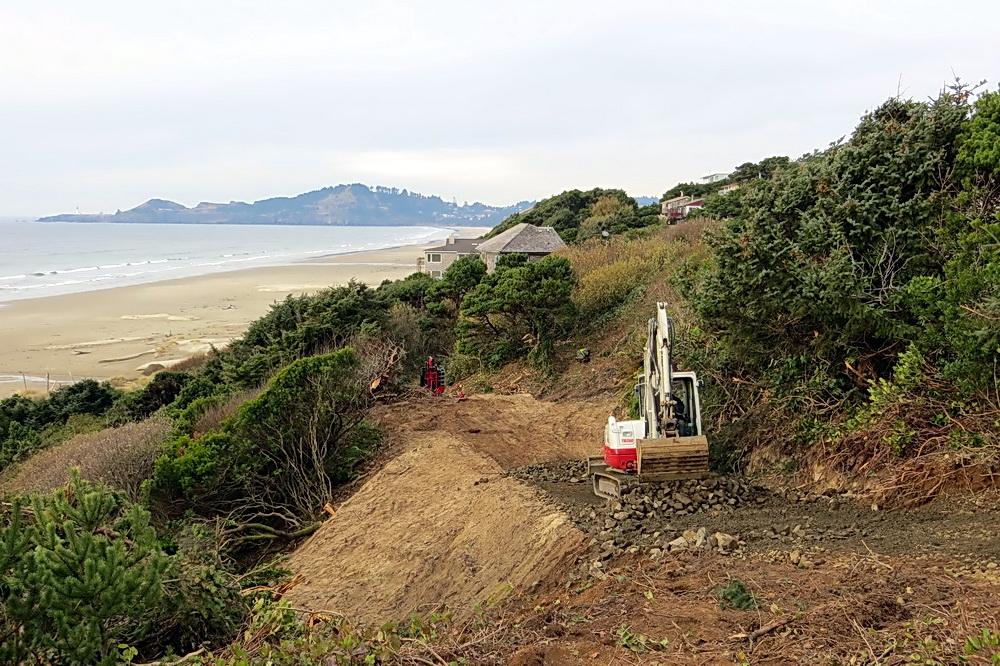 Preliminary work on the proposed development on Newport Spring Street that triggered the proposed city code change.\Photo by Elaine Karnes.

At the request of Oregon Shores member Mona Linstromberg, backed by Oregon Shores, the city of Newport has been considering a change to the city’s planning process that would remove a barrier to citizens concerned about proposed development in geologic hazard areas.  At its Monday, Oct. 7 meeting, the Newport City Council will consider adopting this change.  The meeting takes place at 6 p.m. in Newport City Hall (169 S.W. Coast Hwy) in the council chambers.

Up till now, Newport required that citizens challenging the geologic hazard report presented by a would-be developer, done by an engineering geologist hired by the developer, hire an engineering geologist of their own.  This can be highly expensive, creating a barrier to lower-income citizens who want to participate in the land use planning process.

Linstromberg and other local citizens, along with Oregon Shores, persuaded the Newport Planning Commission to approve a change to the city’s code, whereby future geologic hazard reports for proposed developments in landslide and other hazard areas will receive a peer review through the city (paid for by the applicant).  There has been a delay while the city sought out an engineering geologist willing to do this, but now one has been located, and the city is ready to proceed.

This change will allow for a much fairer process in determining the potential risks and impacts of development in hazard areas.

If you are planning to attend and speak, or to send a message to city council in advance of the meeting supporting this change, reference Newport Municipal Code 14.21 Geologic Hazards Overlay.