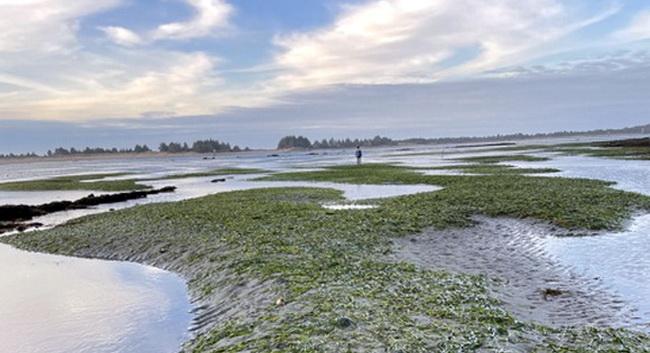 Oregon Shores is in the early stages of a special project to work on better protection for eelgrass habitat in Oregon estuaries.  As a first step in this effort, we have just developed a “white paper” on eelgrass protection, which encompasses everything from federal law to local land use planning.

To celebrate the release of this document, and point toward the next steps in engaging citizens in eelgrass habitat protection, Oregon Shores is sponsoring a two-pronged webinar: “Eelgrass in Oregon’s Estuaries:  Natural History and Planning.”  The event, free and open to all, takes place on Thursday, May 27, at 7 p.m.

The material presented will apply anywhere, but the particular focus will be on the Coos Bay estuary and its important eelgrass beds.  (This work has been supported in part by the City of Coos Bay and the Pew Charitable Trusts.)

Speaking on eelgrass natural history and why it is ecologically important will be Mike Graybill, retired from a long career as a marine scientist and educator, all of which was spent on the southern Oregon coast and much of which was as manager of the South Slough National Estuarine Research Reserve (NERR), a 5,500-acre coastal protected area near Coos Bay.  During his tenure South Slough NERR expanded and diversified while retaining a strong community focus.  When he took the position in 1985 there was a staff of four people; currently 17 full time professionals and numerous part-time and seasonal employees, and volunteers work at South Slough.  He developed and implemented a facilities master plan and oversaw the construction of a public interpretive center and trails network, a maintenance support facility, visiting investigator housing and a fully equipped coastal and estuarine research laboratory.  He was responsible for the development and oversight of the education, research, operations, and administrative programs, and established and advanced the development of research, stewardship, professionals training, public involvement and monitoring programs at the Reserve.  In retirement, he now routinely advises others on coastal wetland and watershed restoration.

Describing planning and protection for eelgrass, and how citizens can be involved, will be Anuradha Sawkar, the principal author of our white paper.  Anu is the attorney we work with most often as part of our Coastal Law Project, a partnership with the Crag Law Center.  Anu is Crag’s Coastal Law Project Legal Fellow. Anu, an almost life-long Oregonian who grew up in Portland, earned her J.D. with a concentration in Advocacy from Cornell Law School. She joined Crag Law Center’s staff in January, 2019, and immediately plunged into representing Oregon Shores on a wide range of issues, notably in the many regulatory processes involved in our opposition to the proposed Jordan Cove LNG (liquefied natural gas) export terminal on Coos Bay’s North Spit.  The need to preserve eelgrass protections has been a key factor in our ability to block Jordan Cove, an effort in which Anu has been instrumental.