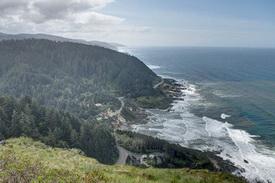 The Oregon Marine Reserves Partnership (OMRP) has released the second in its series of videos on Oregon’s new marine reserves.  Featuring Paul Engelmeyer of the Audubon Society, the video features panoramic shots of Cape Perpetua and information about the unique habitats and creatures found there, from Sea Lion Caves (the largest sea cave in the Americas) to the marbeled murrelet, which feeds in the ocean but nests in the old growth.

Oregon Shores is a member of the OMRP, which works to educate Oregonians about our new system of marine reserves and build grassroots support for them.