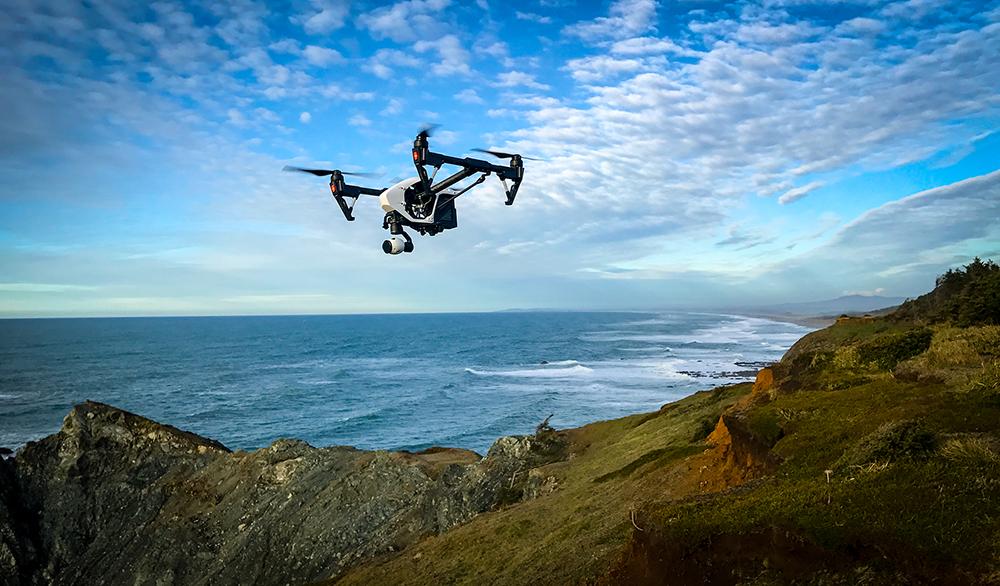 Drone over the Oregon coast.\Photo courtesy of Oregon Coast Aquarium.

Drones have research and commercial uses, but recreational drone use, often by unskilled or reckless operators, is on the increase.  This can have serious impacts to wildlife, as well as other human activities, privacy, and solitude. The Oregon Parks and Recreation Department (OPRD) is drafting new regulations governing the use of drones in state parks.  Since the department manages the entire Oregon shoreline, these regulations will be particularly important for public beaches and coastal wildlife.

The Oregon Parks and Recreation Commission held a public hearing on the proposed drone regulations in April, during which many members of the public testified. There has been keen public interest in this issue; OPRD received well over a thousand comments. The majority of these comments asked for stronger drone regulation, or an outright ban in state parks and on the shoreline.  But it isn't an overwhelming majority.  Continued public engagement will be necessary if careful regulation of drones is to be achieved. Oregon Shores joined with other concerned conservation groups in calling for much stricter regulations than were initially contemplated by OPRD staff.  We submitted extensive comments backing up this demand.

OPRD can’t regulate where drones fly, only where they take off and land.  However, operators are supposed to keep drones in sight, so prohibiting take-offs and landings in buffer zones around important habitat areas can protect them from being buzzed, disturbing wildlife and human visitors.  It is therefore important that locations where drones can be operated be far enough from bird nesting or marine mammal pupping sites that legally operated drones can’t reach them.  (Illegally operated drones are another story, but it will be easier to report violations if it is clearly understood that no drone should be in a protected habitat area.)

Oregon Shores Executive Director Phillip Johnson serves on OPRD’s advisory committee for drone policy.  Both Oregon Shores and Portland Audubon (whose Joe Liebezeit also serves on the committee) are advocating that drones be heavily restricted on the coast except for specific locations where they are allowed.  The committee has held three meetings.  The goal this workgroup gravitated toward is to develop a set of criteria for mapping three zones:  red zones, where drones are prohibited, save with carefully administered special use permits (such as for scientific research); orange zones, where drones may be permitted, with various types of limits, also requiring permits; and green zones, where drones are permitted.  A permit may be required for green zones as well, readily available but providing an opportunity for OPRD to keep track of drone use and to ask drone operators to read a set of best practices; this is still under consideration.

Over a million seabirds and shorebirds nest along Oregon’s coastline every year, including the endangered Western Snowy Plover and species of concern like the Tufted Puffin and Black Oystercatcher. Wildlife disturbances due to improper drone use are increasing on the Oregon coast. Last year the Oregon Black Oystercatcher Project documented a rate of over three drone disturbances per week at active Black Oystercatcher nests. Marine mammals can also be driven off haul-out and pupping areas by drones.  Limiting drones through these regulations will help to protect these key habitat areas, while preserving peaceful experiences for those who want to explore Oregon’s natural places, observe wildlife, and recreate safely. We are arguing for liberal use of red zones on the coast.

The current draft of the regulations which attracted so much public opposition has been scrapped. Instead, OPRD staff will develop maps for the three zones, covering all state parks, over the next six months or so.  At some point, probably late spring on the current timeline, the maps of permitted and excluded areas will be made available, to the drone advisory group and for public inspection. The committee will no doubt debate the details of the maps. This will also be the point at which the public can weigh in.  Conservation voices may be needed if the draft maps don't include extensive enough red zones to preserve wildlife, or if the criteria for oranges aren't stringent enough.