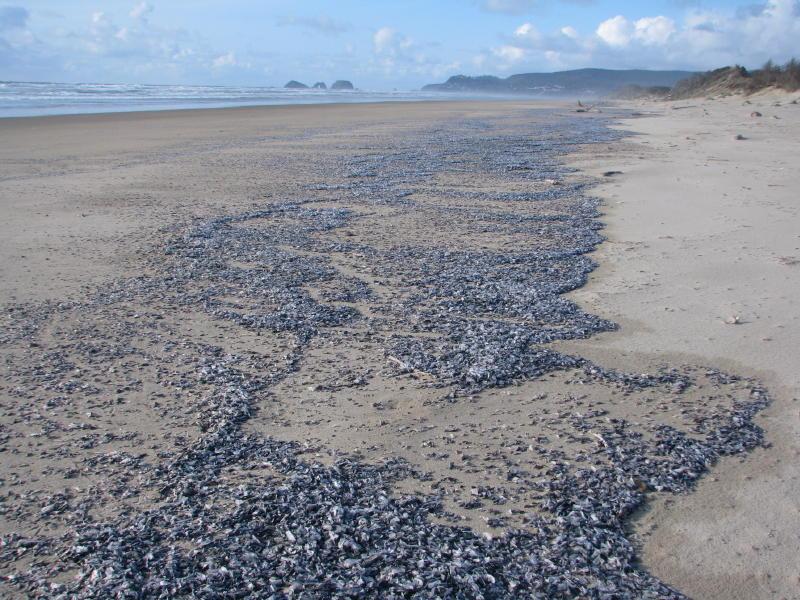 Reports have been flooding in since mid-March that the by-the wind sailors, known to science as Velella velella, have arrived early this year.  Large masses have been reported on some beaches, in some cases already decomposing.  What’s more, we’re seeing large wash-ups of young, so small they aren’t readily apparent as this organism, as the tiny creatures are just changing from medusa to polyp.  These are the “purple masses” that some CoastWatchers have reported.

By-the-wind sailors washing up in large numbers—first shimmering and beautiful, then slimy and smelling—are an annual event in spring, at times when they are reproducing rapidly offshore and strong onshore winds steer them to the beach.  Last year we experienced an unusually large wash-up, and this year we are seeing not only an early arrival, but huge masses of immature Velella.  The changed pattern could be a result of climate change, although it is too early to tell.

In honor of this annual cycle, here is a “Sightings” piece from earlier years, written by CoastWatcher Bonnie Henderson:

Every avid Oregon beachcomber is familiar with Velella velella, or by-the-wind sailors: little (typically 4 to 6 cm.) violet-blue floating creatures that are often stranded by the hundreds or thousands on the beach April through July. Last year, as many beachgoers have noted, they have stranded by the hundreds of thousands--but this is still part of the natural cycle. They live in vast congregations on the sea’s surface, in warm and temperate ocean water around the world. They have no means to propel themselves; rather, they move at the whim of wind and current. They’re driven ashore by strong west winds, the same winds that wash glass floats, plastic bottles and other debris from the “Great North Pacific Garbage Patch” onto our beaches.

The “sail” is Velella’s most distinctive feature; it’s what catches the wind, and it’s all that’s left—dry as parchment, or soft and rubbery—after the rest of the animal has rotted away. It’s also the source of Velella’s name (velum is Latin for sail). Hanging from the fringes of the float are tentacles that contain stinging cells; you might not feel the sting on your fingers, but take care to not touch your eyes next.

A few fun facts about Velella: