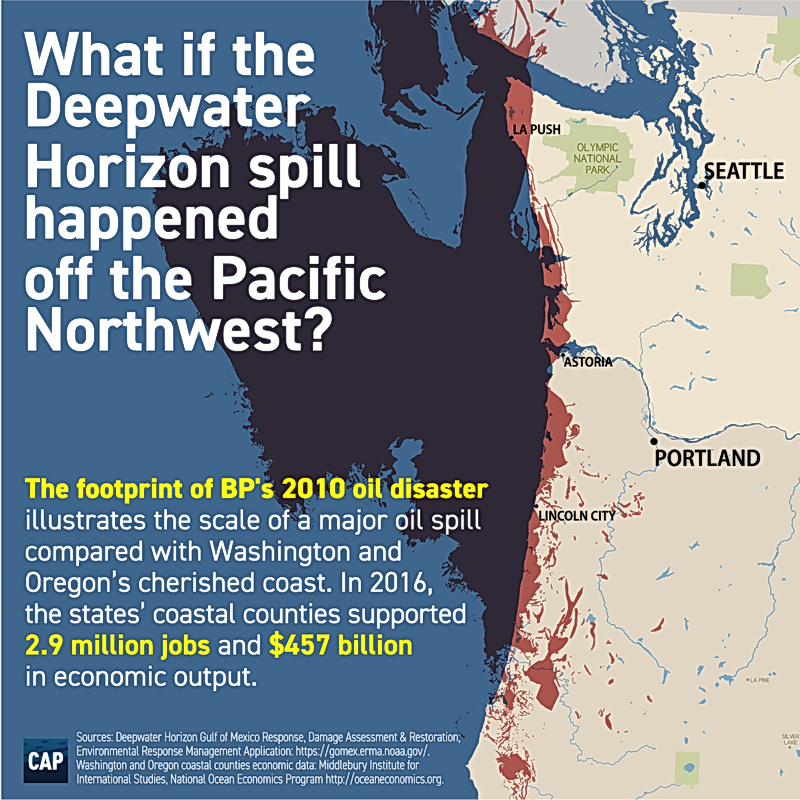 On Jan. 4, the Trump Administration abruptly announced that it planned to open 90% of U.S ocean waters to oil drilling.  Lease sales would be offered in 25 of the 26 areas into which America’s federal ocean waters are divided, including the area off Oregon and Washington. At virtually the same time, the administration also announced new proposed rules that would weaken the safety regulations that govern oil extraction.

Conservationists weren’t alone in being surprised and outraged.  None of the West Coast governors was given advance notice, let alone consulted.  Govs. Kate Brown of Oregon, Jay Inslee of Washington, and Jerry Brown of California put out a joint statement fiercely denouncing the proposal within an hour or so of the time it was first announced.  This is the first time there has been a proposal to allow oil drilling off the West Coast since the Reagan administration.

Oregon Shores, which played a leading role in opposing the last federal push for oil exploitation in the 1980s, has made opposition to this scheme a priority.  We geared up the resistance by joining a range of other groups for a rally in Salem on February 6, attended by more than 200 people and a parade of elected officials promising to do everything in their power to prevent this misbegotten plan.  The rally coincided with a hearing on the draft proposal planned by the federal Bureau of Ocean Energy Management (BOEM).

BOEM has set up a page where members of the public can submit comments with their views on opening Oregon's waters to oil drilling.

If you would like some help in composing comments, see these talking points.  Gain inspiration from this letter (boem_comments_feb._2018.pdf) composed by Oregon Shores member and CoastWatcher Jean Cameron as a source of ideas.

Since the initial announcement, the administration has reversed course with regard to the waters around Florida, where President Trump has his resort and the Republican governor, who opposes drilling, plans to run for the Senate.  Gov. Brown has been interviewed on national television, denouncing this as an obvious political ploy.

Given the very strong opposition to offshore oil drilling on the part of both state populations and political leaders on the West Coast, and the fact that drilling would be a dubious proposition off Oregon, given the rugged ocean conditions and possibility of earthquakes, the threat may never really materialize.  But Oregon Shores believes that the best way to assure that this attempt to hand over ocean resources to the fossil fuel industry is thwarted is through very strong, widespread expression of opposition, and we will work with other ocean-oriented conservation groups in Oregon and around the nation to that end.

Jean Cameron has helpfully summarized the procedure for commenting.

To mail your comments, send them to:

Here are the instructions to submit comments online:

Internet comments should be submitted via the Federal internet commenting system, here.  BOEM requests that commenters follow these instructions to submit their comments via this website: