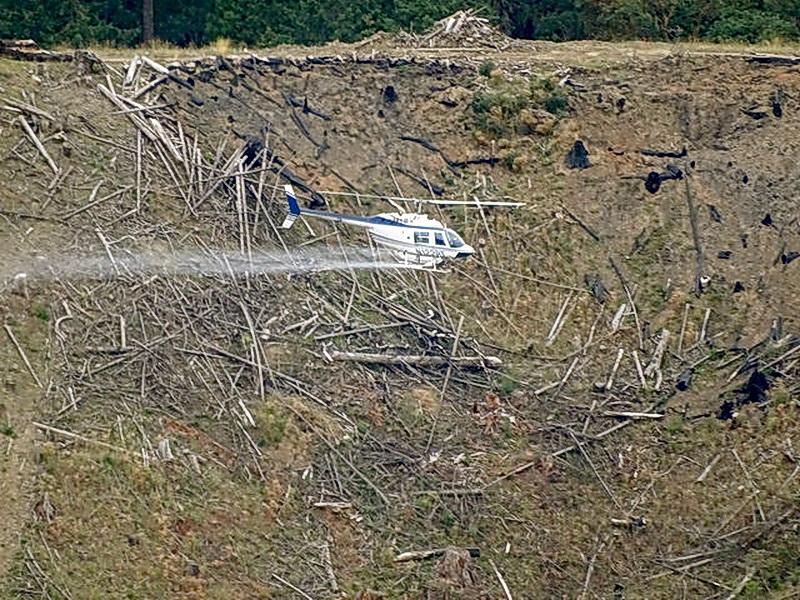 We are at least 50 years into the battle against the aerial spraying of toxic herbicides that damage ecosystems and threaten human health and water supplies.  Long-time Oregonians will remember the struggle in the Coast Range against the use of sprays containing dioxin (2,4,5-T).  Herbicide opponents succeeded on one battle front in 1984, when aerial spraying was banned in federal forests.

However, the use of aerial spraying continues on private and state lands, and is common in coastal watersheds.  The sources for water supplies for many coastal communities are located in watersheds at risk for spraying, and concern about possible toxins filtering into water for human consumption is rife among Oregon shores members and coastal residents in general.  The Oregon Forest Practices Act outlines regulations for supposedly safe application, but in this as in so many things, the Act is inadequate, and doesn’t really eliminate the threat of toxic sprays to people and ecosystems.  Chemicals used in aerial spraying can travel on coastal fog and through groundwater, as well as down streams and rivers, and may spread widely.

All this being the case, coastal residents understandably want to know when and where aerial spraying will take place.  There is a tool that can help.  The Oregon Department of Forestry (ODF) has a statewide notification system known as FERNS (Forest Activity Electronic Reporting and Notification System).

The existence of FERNS isn’t widely known.  It provides a means of tracking plays for aerial spraying, as well as for other scheduled forest management actions.  With advance notice, residents of areas at risk for spray impacts can contact operators and ask for specifics, and notify them of areas of particular risk, such as drinking water sources or pasturing livestock.  Forest operators are required to file notice at least 15 days before conducting a spraying, logging, or slash burning operation.  (If an action takes place that was not property notified, this would give opponents a handle against future plans, at least by this errant operator.)  If you subscribe to FERNS, you can submit comments on such operations to ODF on the site’s notification page.

More information on the site of the Spray Free Coast campaign, https://sprayfreecoast.org/.