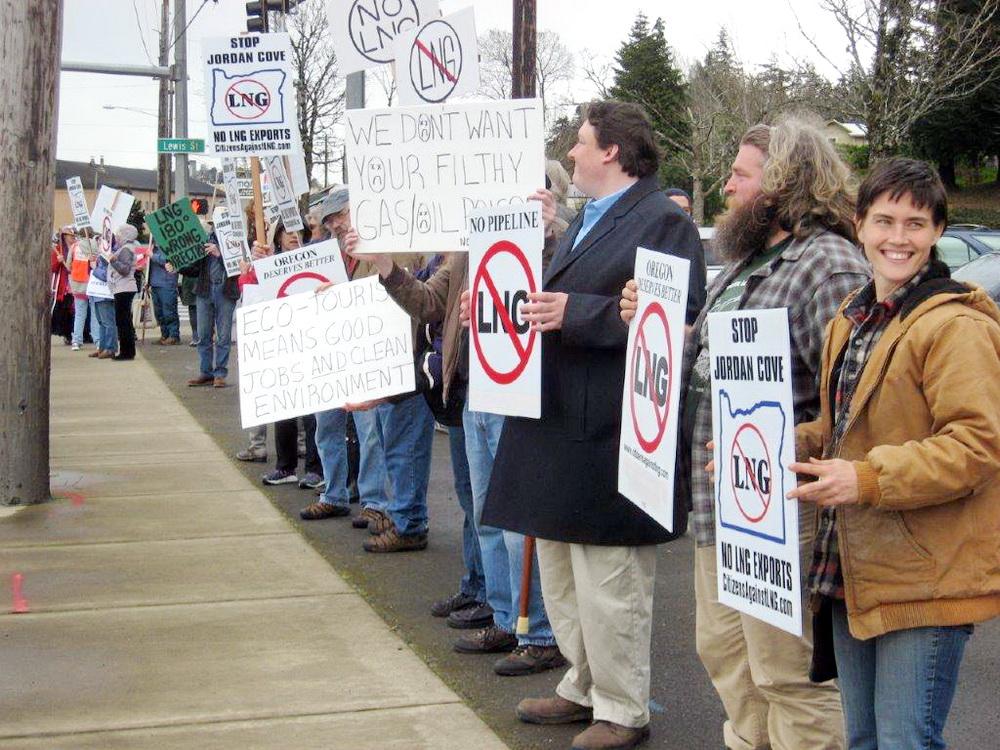 Protest against Jordan Cove in North Bend.\Photo by Jody McCaffree.

The Land Use Board of Appeals (LUBA) has awarded Oregon Shores and allies a significant, multi-part victory in our efforts to block the proposed Jordan Cove LNG export terminal.  In a decision handed down on Dec. 22, LUBA overturned Coos County’s permits for the Jordan Cove Energy Project’s planned marine terminal and associated infrastructure on Coos Bay’s North Spit. While this doesn’t end the battle, it puts up a serious obstacle to Jordan Cove’s attempts to build the LNG plant and associated pipeline.

The state’s review board determined that the county erred in granting permits to dredge in Coos Bay and develop infrastructure on the North Spit (the traditional lands of the Coos, Lower Umpqua and Siuslaw Indians, whom we are currently supporting in a different appeal). The decision highlights concerns related to interference with public trust rights in the bay itself, and the proposed building of a wastewater treatment facility outside an urban growth boundary. The decision means that, barring further appeal, the company will need to go back to the County for further review.

Oregon Shores, represented by the Crag Law Center through our Coastal Law Project partnership, was the lead petitioner on these appeals (originally two appeals, which were consolidated).  Of nine issues raised, we won on four of them, and allies Citizens for Renewables won on another two.

“LUBA first overturned this permit in 2017. We won again, and we won’t stop fighting. The longer this battle goes on, the more it becomes clear that this project is bad for Coos Bay communities and ecosystems,” said Courtney Johnson, Crag’s executive director.

In July, LUBA reversed the City of North Bend’s approval of a local land use permit that would have allowed the disposal of dredged material from the proposed widening of the federal navigation channel in Coos Bay. The State of Oregon has also denied key water quality and coastal zone permits for the project and earlier this year Pembina, the Canadian fossil fuel corporation behind Jordan Cove LNG, withdrew permit applications from the Oregon Department of State Lands. Pembina has not reapplied for these permits.

There are several other land use permit challenges pending before the Land Use Board of Appeals that are likely to be decided in 2021. On the very day that LUBA sent Jordan Cove’s land use approvals back to Coos County, attorney Anu Sawkar of Crag delivered briefs on our behalf on two other appeals.  Meanwhile, legal challenges to the Federal Energy Regulatory Commission’s conditional approval of the project are awaiting court proceedings.