Landowners Rush Ahead with Riprap in Advance of Appeal 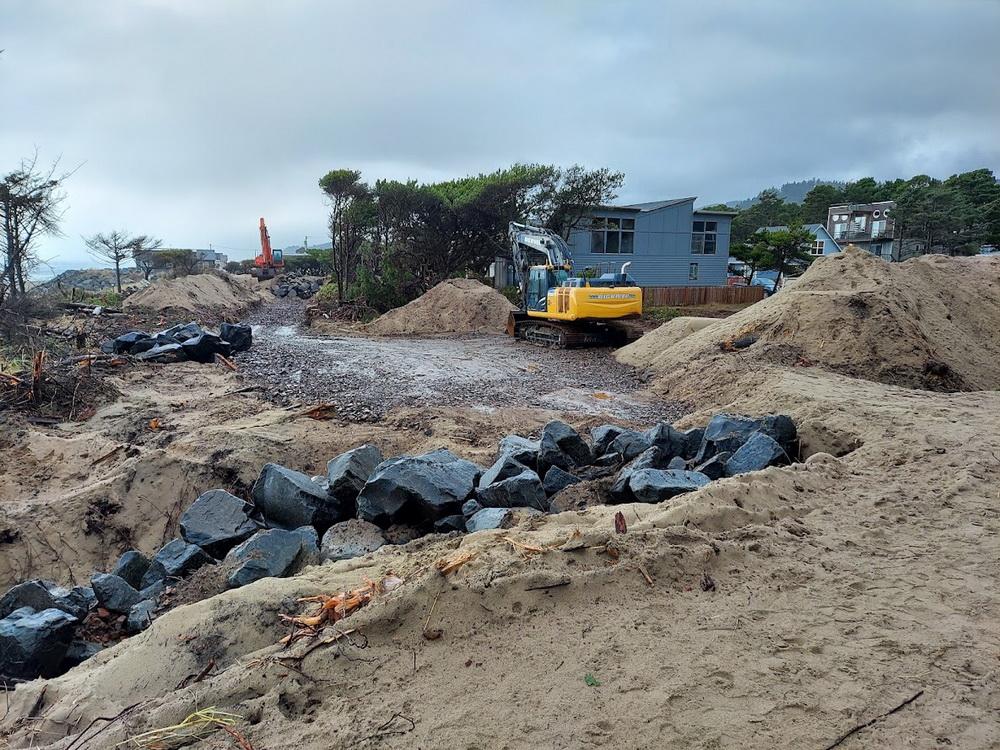 Destruction of the shoreline at Pine Beach due to shoreline armoring project.\Photo by Randy Stevenson.

Oregon Shores is battling what we consider to be a grossly inappropriate shoreline armoring project in Tillamook County.  Joined by the Surfrider Foundation, we are appealing a decision by the county commissioners to allow an “exception” to statewide planning Goal 18, which protects beaches and dunes.  We argue that the properties in question are clearly not eligible for armoring, and that allowing this project undermines critical coastal protection.  For more on the issue, see our article elsewhere on the website.

The appeal is pending before the state’s Land Use Board of Appeals (LUBA), but the owners of the properties involved didn't wait for the outcome of the process.  Instead, they used the county’s approval as a pretext for plunging ahead with the project. They are in effect playing “chicken” with the state, betting that even if they lose the appeal, they will not actually be forced to remove the revetment they have already installed, even though it would then be illegal.

The oceanfront homeowners in the Pine Beach area of Tillamook County (just north of Tillamook Bay and south of Rockaway Beach) who are seeking an exception launched the construction of the riprap wall in November, and in doing so destroyed and removed their natural line of defense between their homes and the ocean. The homeowners brought in stump grinders, chippers and earth movers and removed nearly every last tree and shrub along this stretch. They destroyed the foredune structure and flattened the landscape between the homes and the ocean shore, further putting themselves in harm’s way, counting on getting away with armoring the shoreline, even though we believe there is a good chance that the appeal will succeed.

Under Oregon law, Tillamook County’s decision to approve an exception to Goal 18 and change local land use law to allow riprap on the dune is currently “effective” but not yet “acknowledged” (i.e., determined to be consistent with the required state land use laws). If a local government’s decision is overturned on appeal, any goal exception or plan amendment approved by the decision will fail to gain acknowledgement. This means any construction, such as the activities conducted by the applicants in this case, made pursuant to the overturned decision cannot be retained. In other words, such development should be removed and the area restored to comply with state law.

The trees that have been removed to make way for the riprap anchored the foredune and acted as a natural line of defense between the ocean, the shoreline and the homes. These homes had some of the best natural defense on the Oregon coast and despite their relatively low elevation, there was a lot of natural buffering potential within this landscape. This could have provided an opportunity for embellishing a natural barrier.  Instead, determined to build a massive rock wall between themselves and the ocean to protect houses that were built in full knowledge that the location was risky, the homeowners completely leveled their natural protection and destroyed the natural landscape for everyone.

This means that if Oregon Shores and Surfrider win the appeal before LUBA, there will be another, nasty battle to enforce the law and require that the shoreline armoring be removed and the natural landscape restored, to the extent that this is possible.  This is a precedent-setting case that is critical to our ability to protect Oregon’s public shoreline for everyone, so we are committed to battling all the way.