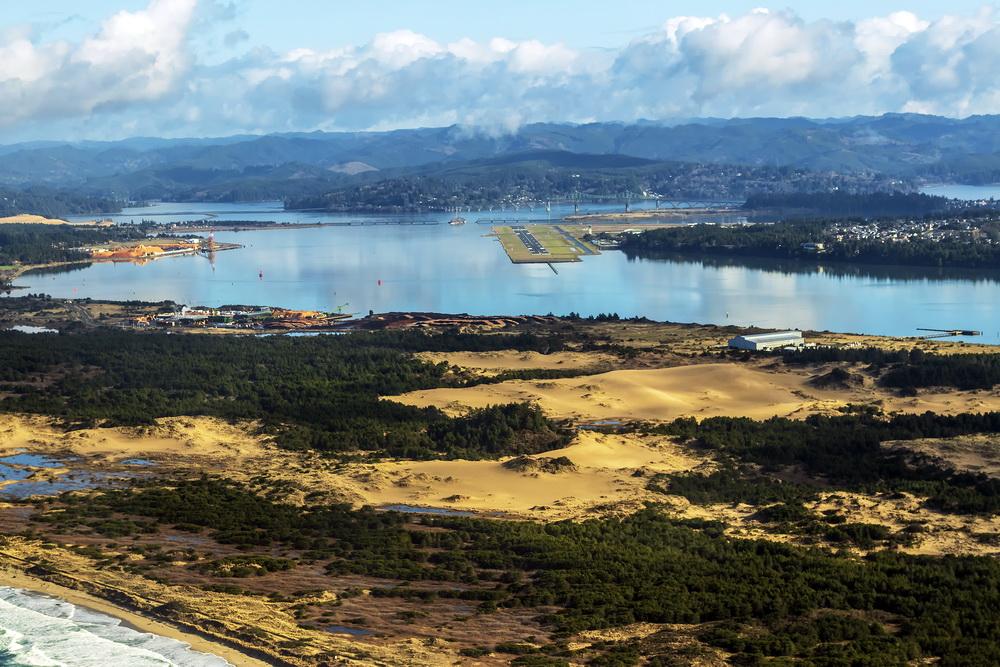 Oregon’s Department of Environmental Quality (DEQ) has denied a water quality certification to the Jordan Cove Energy Project’s proposed LNG (liquefied natural gas) export terminal, aimed at Coos Bay’s North Spit.  Acting with its authority under the Clean Water Act, the state agency, in a decision announced on May 6, determined that Jordan Cove and its associated pipeline failed to demonstrate that the massive project would meet Oregon’s water quality standards.

The decision was made “without prejudice,” meaning that the corporation can return to DEQ with additional information and attempt to get the decision reversed.  Jordan Cove and its Pacific Connector pipeline can also request a “contested case” hearing.  This is not the end of the decade-long battle that Oregon Shores and many other conservation and community groups have been fighting to block the LNG project.

However, it is a major setback to Jordan Cove.  DEQ didn’t reject the project on a few limited technical points.  The agency’s evaluation report is more than 200 pages long, containing detailed analysis and raising many questions.  Jordan Cove will have a major burden to bring forward sufficient information to persuade DEQ to reverse its decision.  Of course, Oregon Shores would argue that this information doesn’t exist, because the LNG terminal with its 229-mile pipeline crossing southern Oregon and affecting hundreds of streams and rivers is intrinsically damaging to the state’s waterways.  Plus, the decision indicates that the state of Oregon does have the political will to say “No” to Jordan Cove.

Many organizations worked on the collective comments in opposition to the project we made to DEQ.  Still, Oregon Shores, together with our Crag Law Center Partners, made a major contribution, and our arguments proved effective.  We focused on the project’s potential impacts to the estuary, especially through dredging, and on impacts to the bay and its shorelands, which we have argued violate local comprehensive land use plans.  In its findings, DEQ cited the concerns raised in our comments, largely drafted by Crag attorney Courtney Johnson.

We pointed out the inadequacy of Jordan Cove’s evaluation of the proposed directional drilling (HDD) under Coos Bay that it proposed to conduct for the pipeline. DEQ agreed that “because the available information evaluated to-date does not adequately characterize the proposed activities and mitigation measures, or the potential effects on water quality, DEQ cannot conclude there is a reasonable assurance that the proposed HDD crossing of the Coos Bay estuary would be conducted in a manner that would not violate the statewide…criteria.”

DEQ also concluded that JCEP had failed to demonstrate that the facility itself would not violate water quality standards, due to the absence of details concerning dredged material disposal controls, spill containment for the terminal, and infiltration controls for construction facility areas, and because the proposed stormwater controls at the terminal site and proposed dredging activities would not employ the highest and best treatment options for preventing and minimizing turbidity.  These are all key points we made.

DEQ further concluded that the Jordan Cove Energy Project (JCEP) had not adequately shown that its massive dredging on the North Spit would not alter nearby wetland habitats and seasonally flooded environments.  It found “JCEP’s proposed management of stormwater in the Terminal and Off-Site Project Areas during construction and operation of the project is likely to cause short and long-term alterations to wetland hydrology, turbidity, and form with sediment deposits, and these changes would result in detrimental alterations to the resident biological community dependent on these wetlands.”

DEQ concluded that dredging would likely violate water quality standards for turbidity, in part because “JCEP’s modeling conducted confirms that dredging at the Navigation Reliability Improvement locations, the Slip, and Access Channel would cause turbidity levels to increase above allowable numeric limits.” These, again, are all arguments that we made.

There is also a strong section in the decision document on the inadequacy of the land use approvals needed from local jurisdictions.  This section references both the Douglas County Circuit Court decision that invalidated the conditional use permit for the pipeline (which we played a small role in helping achieve), and also specifically notes our win at the Land Use Board of Appeals on the prior land use terminal application and LUBA’s remand findings that referred water quality issues back to Coos County. (Oregon Shores and local partner Citizens Against LNG successfully appealed land use approvals issued by the county for the terminal.  Jordan Cove is now trying again.) DEQ concluded that because “key elements of the proposed Project are not currently allowed under the county’s acknowledged comprehensive plan and land use regulations, DEQ cannot (at this time) determine that the Project is compatible with the acknowledged comprehensive plan and land use regulations. Some aspects of these decisions are clearly water quality related.”

See this additional article, which provides additional background on the long struggle to prevent an LNG terminal from damaging the Coos Bay estuary and habitats all across southern Oregon.

The decision came much more quickly than expected.  The Trump administration has been making moves toward attempting to limit the authority of states under the Clean Water Act to block pipelines based on state standards.  DEQ moved quickly to make sure its authority wasn’t in any way preempted, so the administration’s efforts to push fossil fuel development had the ironic effect of prompting the denial.