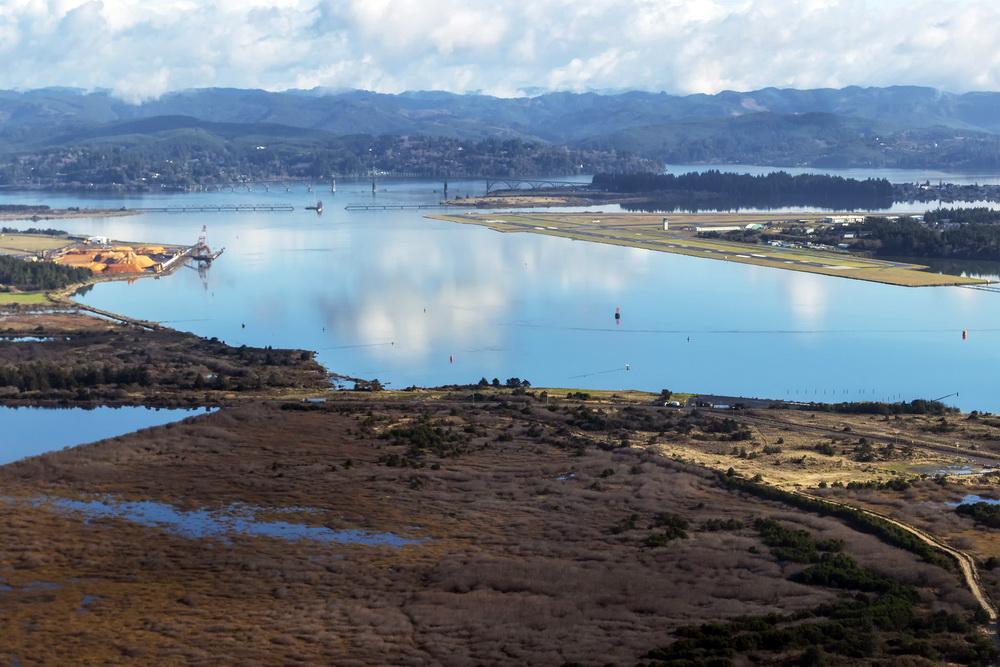 Jordan Cove, at left in the photo, won't be the site of an LNG terminal.\Photo by Rena Olson, with support from Lighthawk.

Exciting news for anyone concerned about land use, estuaries, and climate change:  The Jordan Cove Energy Project has abandoned its effort to build an LNG (liquefied natural gas) export terminal on Coos Bay’s North Spit.  On Wednesday, Nov. 30, Pembina, the Canadian multinational behind Jordan Cove, declared to the Federal Energy Regulatory Commission (FERC) that it was withdrawing, asking FERC to cancel the authorizations that the project had received from the federal government.

Oregon Shores has been battling Jordan Cove for well over a decade.  Indeed, this is the third version of the LNG terminal scheme we have helped to defeat.  Pembina’s withdrawal is the death knell for the proposal in its current form, and this is an outcome in which we and our partners in opposing Jordan Cove can take great satisfaction.  The LNG proposal has already risen from the ashes twice, however, so it will be necessary to remain wary, especially if the political climate changes.  (The recently defeated application was initiated immediately after the election of Donald Trump in 2016, as an unsettling precedent.)

For now, though, Oregon Shores and other opponents can celebrate.  Fighting Jordan Cove, which if built would have devastated the Coos Bay estuary and become the state’s largest emitter of greenhouse gases, has been the major and most time-consuming challenge facing our Land Use Program for many years.  Throughout this time, the Crag Law Center has been our essential partner, working with us through our Coastal Law Project partnership.  Anu Sawkar, Crag's Coastal Law Project attorney, and before her Courtney Johnson, now Crag's executive director, along with other colleagues, have handled the legal aspects of our advocacy, with a long string of successes. The end of the battle—at least for now—means that our Land Use Program and Coastal Law Project can focus more energy on habitat protection for estuaries and rocky shores, coastal hazards, climate change impacts and shoreline management, and other key issues.

The official conclusion of the Jordan Cove issue may have come before FERC, but as Pembina acknowledged in its request to the agency to abandon the application, what really blocked the project was the inability to gain the state and local permits that were required.  Oregon Shores played an active role within a coalition that opposed state permits for water quality (rejected by Oregon’s Department of Environmental Quality under the Clean Water Act) and dredging and filling (knowing that this was about to be rejected by the Department of State Lands, Jordan Cove withdrew its application at the last minute).

Key obstacles to the Jordan Cove project were a set of five decisions under Oregon’s land use laws.  Compliant local government bodies (those of Coos County, and the cities of Coos Bay and North Bend) had issued land use approvals for the project, but five successful appeals to the state’s Land Use Board of Appeals tossed these out.  Oregon Shores was the lead appellant on four of these appeals (joined for various cases by Surfrider, Rogue Climate, and the local Citizens for Renewables), and intervened on the site of the Confederated Tribes of Coos, Lower Umpqua, and Siuslaw Indians on the fifth.

Having been thwarted in its effort to obtain the state and local permits it needed, Pembina then faced a demand by the coalition of opponents that FERC rescind its federal authorization of the project, since under the Coastal Zone Management Act, federal actions must be consistent with the requirements of state coastal management programs.  This led FERC to ask Pembina to “clarity its intentions.”  It is at this point that Pembina gave up and pulled the plug.

Unless Pembina tries again someday, the landowners along the route of the 229-mile-long pipeline across southern Oregon that would have been part of the project are spared the threat of eminent domain; the Coos Bay estuary will be spared the threats of habitat destruction and water pollution; and Oregon will have a better chance of meetings its goals for greenhouse gas reduction.