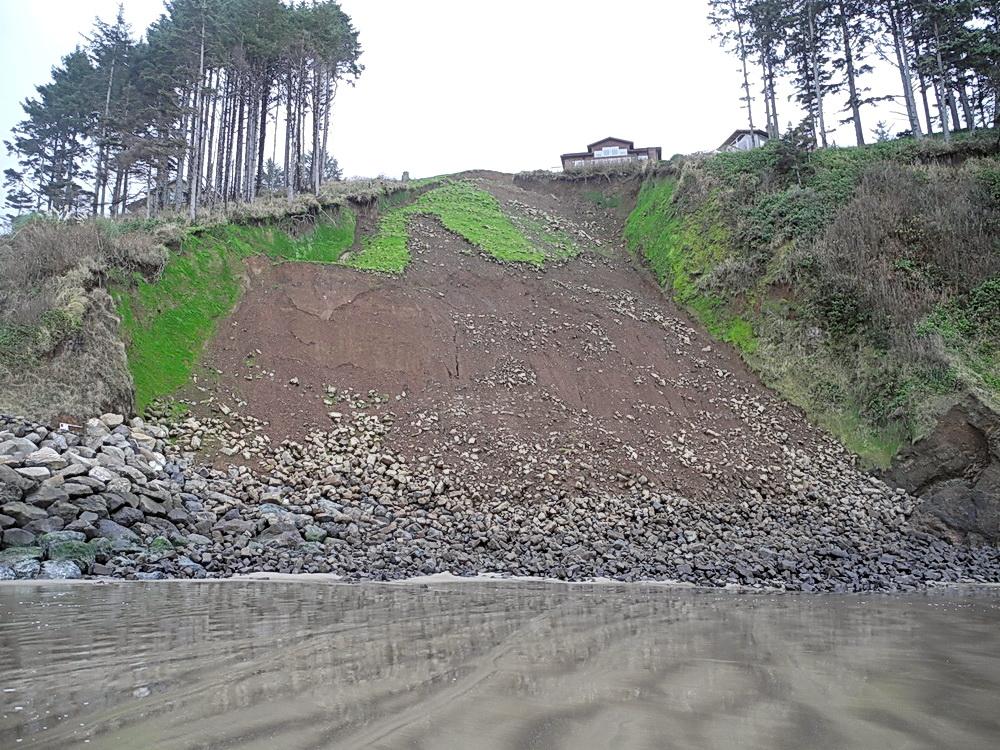 A plan by Neskowin homeowners Ken and Judy Graham to stabilize the eroding slope beneath their house drew an argument in opposition from Oregon Shores, but word has arrived that the Oregon Parks and Recreation Department (OPRD) approved the permit. The Grahams applied to OPRD, which is responsible for permits to alter the shoreline, for permission to install rockfall mesh over a previous installation that has been failing. We argued that this is the wrong solution to the wrong problem.

The Grahams’ home at the southern end of Neskowin was threatened by a landslide in 2012. On the basis of an emergency permit, they installed riprap at the toe of the landslide, and rock facing on the slope above. While the riprap held, the rock placed on the slope did not, and much of it wound up on the beach. (To their credit, the Grahams had it removed.) They now sought a permit to stabilize what is left of the rock on the slope with mesh, which we contended is unlikely to be effective and will certainly be unsightly.

The claim is that wave erosion threatens the house and property, justifying the new project. However, by the Grahams’ own testimony, the riprap itself has been effective and continues to protect the bluff from wave action. The riprap was therefore not the issue, and Oregon Shores did not oppose its being left in place. The threat to the house is due to a landslide, not erosion from the ocean side. Rock and rockfall mesh will not halt the slide. It may be that nothing can arrest the landslide, but we argued that the best hope is not a rigid structural approach, but planting the slope with native vegetation. This would work with rather than against nature, and would also improve the appearance of the slide area, rather than turn it into a greater eyesore, diminishing the beauty of the area for all who visit it.

Instead, the temporary riprap, placed through an emergency permit, will become a permanent structure 90 feet long and 30 feet wide, occupying that much of the public beach. The "rock-fill slope" will then mount 160 feet up the bluff, to be held in place by double-twist rockfall mesh. This creates a major impact to the shoreline, both geologically and visually, all to protect one doomed structure.

OPRD’s regulations require that all non-rigid alternatives, including vegetation, be explored before a hardened shoreline protection structure is allowed. We believed that the department should follow its own rules and insist that natural vegetation be given preference in this case, to everyone’s benefit. The agency did not do so. We will continue to protest OPRD's permissive attitude toward allowing hardened structures rather than insisting that all alternatives be given priority.