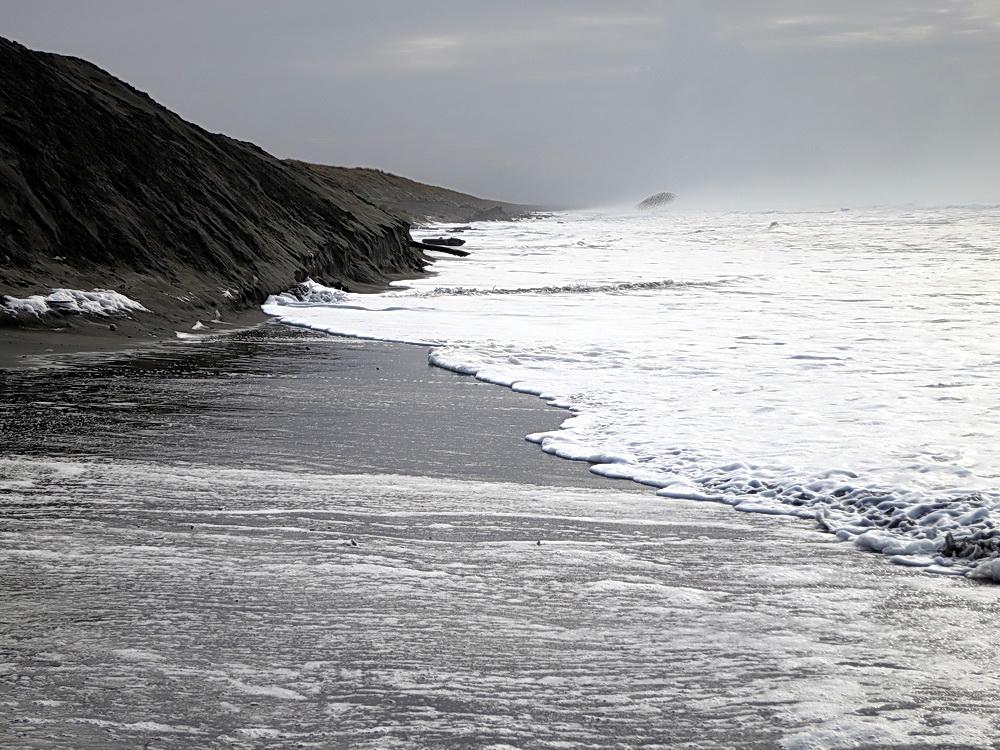 King Tide on the Clatsop County shore.\Photo courtesy of ORKingTides.

The final round of the 2017-2018 King Tide Project, through which volunteer photographers document the highest tides of the year, is upon us.  The third and last series of extreme high tides (known as "king tides") occurs January 2-4.  (The first two rounds took place in November and December.)

Check the event listings for opportunities to get together with other King Tide volunteers for an orientation session and guidance on choosing locations.  There will be King Tide "meet-ups" (casual gatherings intended as opportunities for instruction or simply to join forces with other volunteers) hosted by CoastWatch Volunteer Coordinator Fawn Custer, in Florence on Jan. 2 and Netarts Jan. 4.  Also, watch the calendar for news of several King Tide "wrap-up" parties we'll be throwing in January and early Feburary.

While participating in this citizen science effort, you can also participate in a photo contest.  Your photo will automatically be entered if you submit it through the form on the King Tides Project website (see below).  You can also enter by posting photos to your own Facebook or Instagram site using the hashtags: #KingTides, #ORKingTides, and #WinterWaterwaysContest.  (Note that the posts must be public.)  If you have questions about the contest, e-mail [email protected] or call 541-574-0811.​

This is the eighth year that CoastWatch has collaborated with the Coastal Management Program, along with the Surfrider Foundation’s Oregon branch, to sponsor Oregon’s contribution to this international citizen science initiative.  (The project originated in Australia, where these highest tides of the year are known as “king tides,” so the term is now used for the project around the world.)

Through the King Tide Project, photographers trace the reach of the year’s highest tides, showing the intersection of the ocean with both human-built infrastructure (roads, seawalls, trails, bridges) and natural features such as cliffs and wetlands.  Anyone capable of wielding a camera can participate.

The results from previous years and the November round of this year's project are available for view on a special Flickr site: https://www.flickr.com/photos/[email protected]/albums.

Information on how to participate and post photos can be found on the project’s website, http://www.oregonkingtides.net/.  Participants can post photographs online through this site. Be prepared to include the date, description and direction of the photo. An interactive map is available that will assist photographers in determining the exact latitude and longitude at which a photo was taken.   Photos can also be posted to social media (Instagram, Facebook, or Twitter) and tagged #orkingtides.