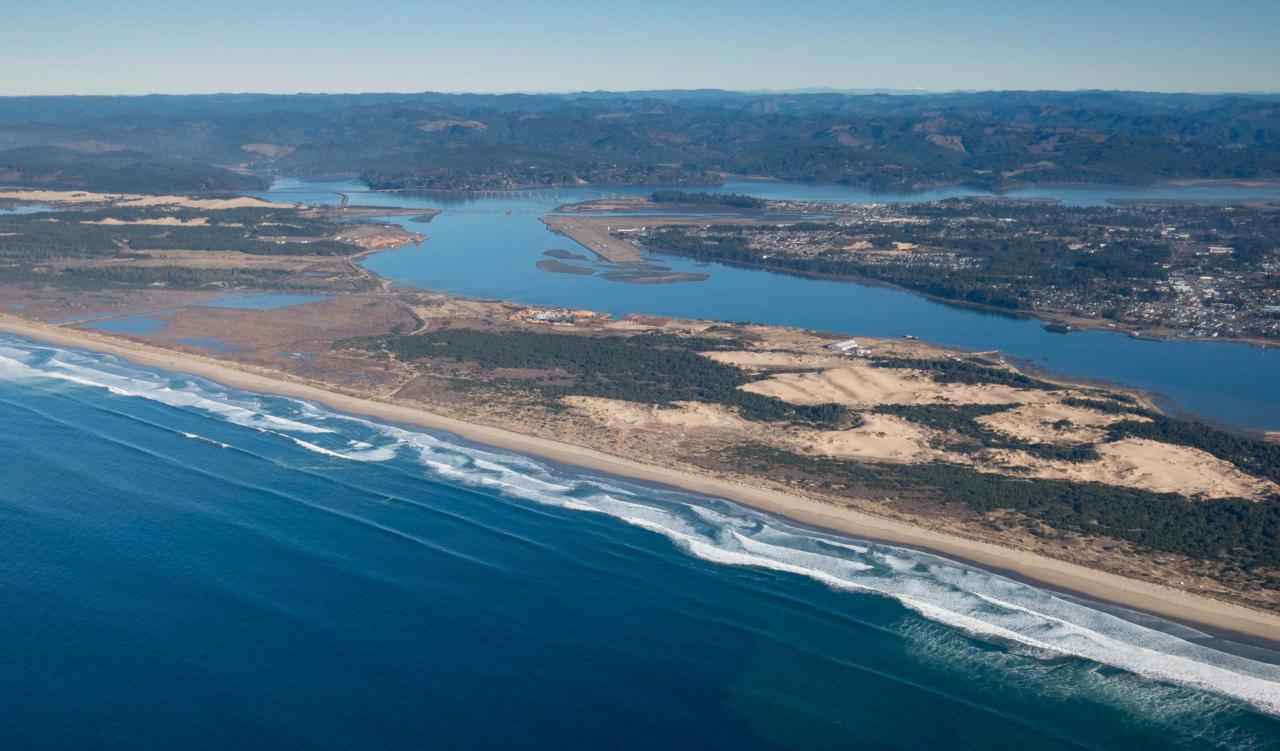 In a stunning development, the Federal Energy Regulatory Commission, which very seldom turns down any energy facility permit application, has denied a permit for the Jordan Cove LNG (liquefied natural gas) export terminal at Coos Bay.  Oregon Shores has been an active member of the coalition battling the project for more than a decade (since it began as an LNG import facility).

The decision, which came as a surprise to all parties to the dispute, doesn’t categorically end the Jordan Cove LNG scheme.  Nevertheless, this is a watershed moment.  The FERC decision throws up a major obstacle to any further efforts to site an LNG plant and terminal on Coos Bay’s North Spit.  The coalition opposed to Jordan Cove filed extensive comments to FERC, arguing against approval of a permit for the LNG plant and its associated pipeline.  Susan Jane Brown of the Western Environmental Law Center took the lead in drafting the comments, but Oregon Shores contributed several sections, drafted by attorney Courtney Johnson of the Crag Law Center, who works on our behalf through our Coastal Law Project.

FERC did not actually decide based on the key environmental issues.  They didn't decide that a highly dangerous facility shouldn't be sited in an earthquake, tsunami and storm surge zone.  Nor did they decide on the grounds that over its life-cycle LNG is no more beneficial than any other fossil fuel, and we simply have to stop facilitating the use of fossil fuels. They decided on the grounds that with no definite contracts for sale of the LNG lined up, and the LNG market crashing in Asia, there was no demonstrated public need that outweighed the impact on the private landowners who would have been subject to eminent domain in order to build the pipeline bringing the natural gas to Jordan Cove.  It's a market-based, property rights decision.  But we'll take it.

In determining whether to approve this type of project, FERC must balance the public benefits of a proposed project against the potential adverse consequences. In a decision sure to resonate nationally as well as in Oregon, FERC found that the “generalized allegations of need proffered by Pacific Connector (the pipeline subsidiary) do not outweigh the potential for adverse impact on landowners and communities.” And without the gas pipeline to serve the Jordan Cove LNG export terminal, “authorizing its construction would be inconsistent with the public interest.”

The decision doesn’t preclude filing a new permit application in the future.  And Jordan Cove along with Pacific Connector have already announced that they will ask FERC for a re-hearing.  The battle isn’t over.

The aspects of the anti-Jordan Cove struggle that Oregon Shores took the lead on--the local land use decision, the water quality issues before both the state and federal governments, the siting of the associated power plant, and dredging Coos Bay for the pipeline and the LNG tankers--still haven't been decided.  These cases are still alive, and we will keep pushing for favorable decisions on those matters, which might prevent the project from coming back someday.  If anything, the situation now elevates Oregon Shores' role within the coalition.  If we can push the state to decide against Jordan Cove on actual environmental grounds--likelier now with the FERC decision as political cover--we may succeed in closing the door once and for all.  We will step up our efforts to persuade Gov. Kate Brown’s administration to declare that the Jordan Cove LNG facility would violate Oregon’s coastal management program, which would force the federal government in turn to declare that placing a dangerous facility on Coos Bay’s North Spit and damaging the estuary in the process is permanently off-limits.