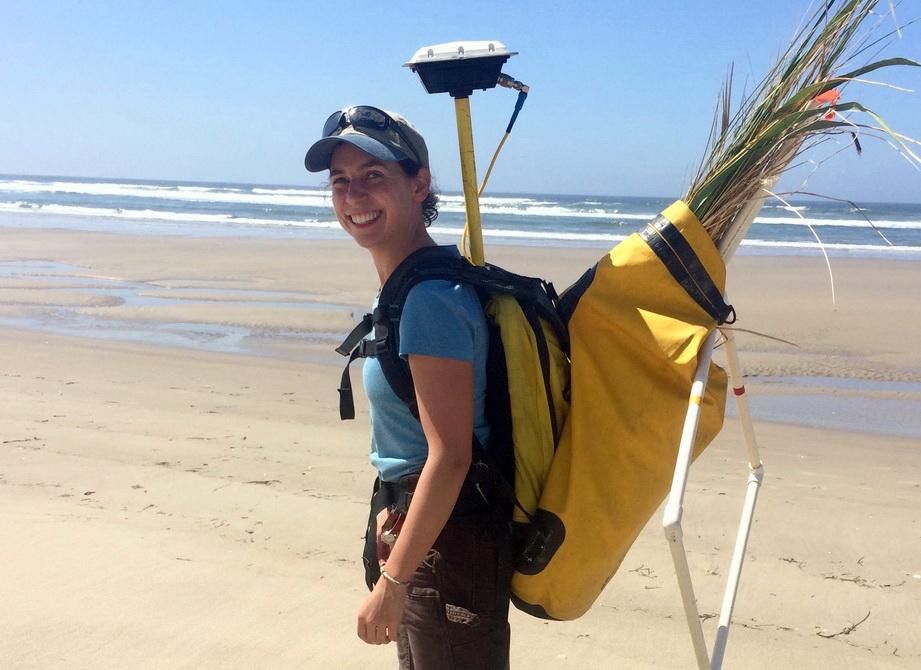 Rebecca Mostow in the field.

Much of the terrain of the Oregon's sandy shoreline we see today has been shaped by two dominant, invasive beachgrass species.  They build the tall, stable dunes that parallel sandy beaches, providing some protection for infrastructure but causing the decline of native animal and plant species.  A team from Oregon State University recently discovered a hybrid beachgrass formed between these two invasive and closely related beachgrass species.  The extent of the spread of this hybrid, and how it may affect the coastal landscape, is not yet known.  A citizen science survey has been launched to map the hybrid, which CoastWatch is helping to organize.

Leading the survey is Rebecca Mostow, a PhD candidate at Oregon State University.  She is a National Science Foundation Graduate Fellow at OSU, where she studies the ecology and population genetics of the invasive beachgrasses. Her research on a novel hybrid zone between the non-native beachgrasses Ammophila arenaria (European beachgrass) and A. breviligulata (American beachgrass) has earned her awards and funding from the National Science Foundation, the Washington Native Plant Society, and the Society for Integrative and Comparative Biology.

Rebecca provided background on beachgrass and the efforts to trace the new hybrid in an information-packed webinar for CoastWatch, which is now available on the CoastWatch YouTube channel:  https://www.youtube.com/watch?v=bhQOlsddcNI.  In the webinar, she tells the story of how this unexpected discovery was made, discusses the potential ecosystem effects of the hybrid grass, and explains how volunteers can help to trace the spread of the new hybrid and expand our understanding of this unlikely event by participating in the citizen science survey.  (A second recorded webinar, which goes into more specific detail about how to participate in the survey, has been uploaded to YouTube as well.)

Field trips for volunteer training had to be cancelled last year due to the pandemic.  However, later this spring in-person training will return to the shore.  Rebecca Mostow will lead two field trips, May 6 at Bob Straub State Park in Pacific City and May 29 at Fort Stevens State Park near Hammond and Warrenton.  See the CoastWatch calendar for details.

The hybrid beachgrass has been identified in the range overlap between the two parent species, between Ocean Shores, WA and Pacific City, OR. In order to understand the ecological and economic impacts of this hybrid, it is essential to develop a better understanding of its range and prevalence, which is where volunteer citizen scientists can help. The citizen science project in which CoastWatch is partnering with OSU scientists was launched in the spring of 2020 with the goal of searching the coast for this potentially ecologically important hybrid grass and mapping its range.

The new hybrid has been noted at more than a dozen locations already, even though many areas of the coast have not been surveyed. Observations made by participants in the survey are uploaded to a special survey site on iNaturalist, https://www.inaturalist.org/projects/hybrid-beachgrass-mapping-in-the-pacific-northwest.  This site is also a good source of information about the project.  (Don’t be confused by references to “marram grass,” which is what Europeans call the plant we call “European beachgrass” and its relatives.)  The iNaturalist site to date has gathered 604 beachgrass observations from 402 users, including 17 observations of the hybrid.

In the early 20th century, two congeneric beachgrasses, Ammophila arenaria and Ammophila breviligulata, were introduced to the Pacific Northwest coast to stabilize shifting sand dunes. These beachgrasses proliferated, spreading well beyond the areas where they were initially planted and growing to dominate the sandy coastline. This beachgrass invasion caused losses in local species diversity and contributed to the declines of two threatened bird species and six endangered plant species. The spread of these grasses also had its intended management impact; by growing and stabilizing dunes, the beachgrasses decreased the vulnerability of coastal communities to extreme storms and sea level rise, leading to complex management tradeoffs between the ecosystem services of coastal protection and biodiversity conservation.

Recently, hybrid Ammophila stands have been discovered at 11 sites along the Northwest coast. In many traits, the hybrids are intermediate when compared to their parent species. For example, the hybrid has intermediate leaf width and ligule length (the ligule is a thin piece of tissue between the leaf and the stem), two important characteristics for identifying the parent beachgrasses. However, the hybrids exceed both parents in plant height, which has been shown to affect dune shape.

This hybrid, and its potential spread, could have a number of impacts on the ecology and ecosystem services of Pacific Northwest dunes. The hybrid differs from the parent species in ways which could cause it to build dunes with different shapes than those formed by the parent species, and any change in dune shape will have a direct effect on coastal protection. Hybridization has also been shown to increase invasion success in plants. Understanding the factors maintaining and structuring this hybrid zone is of immediate and critical management importance.

Participants in the mapping project are identifying the beachgrasses growing on their nearest beach (or along their adopted CoastWatch mile) and uploading observations of these grasses to iNaturalist, a social network that helps users collect scientifically valuable biogeography data and connect with the natural world. Participants in the hybrid beachgrass mapping project are learning how to use iNaturalist, how to identify the two Ammophila species and their hybrid, and where/when to look for the hybrid in order to increase their chances of finding new populations. Visit the iNaturalist project page to view beachgrass observations or learn more about beachgrass identification. By harnessing the collective power of citizen science, the hybrid beachgrass can be searched for more widely than would otherwise be possible. There are now 15 volunteers involved, but there is room for many more.